Merry Christmas from the Chastain Family

Charlie spent some days this summer working with a prayer team at a village home for single, orphan-grad mothers outside of St. Petersburg.  During their time at the home, Charlie and the team were invited by one of the young mothers to attend the baptism of her baby, who would be baptized along with other local children in a ceremony, which they were very honored to accept.

The next day the team joined the other mothers and children and the staff workers from the home for the slow journey through weather-torn, back-country, Russian roads to an old village Orthodox Church where the baptism was to take place.  The main wooden church structure had survived WWII, the Soviet purge of religion and decades of harsh winter.  It had recently been “renovated” – basically some reinforcement of the old wooden beams and a lot of lacquer.  However, when you’d find yourself in between whiffs of incense, you could still smell the mildew and rot.

Once the women had all properly covered their heads in scarves, and everyone had made their way inside, you could feel the apprehension in the team members.  Our Russian team members all came from Protestant backgrounds, and most had heard nothing but awful things about the Orthodox Church.  Even our American Methodist team members didn’t know what to expect. 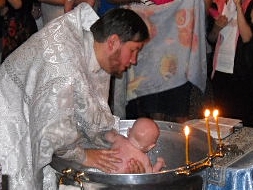 As the service started, the priest appeared in his traditional robes and began singing an old Orthodox spiritual, exclaiming in a low, droning chant the Kingdom of God, and the lordship of Jesus Christ.  After this time of prayer and worship, the priest slowly walked the families and their babies from the church entrance to the altar – symbolically moving the child from outside of the Body to the inside of the Body.  Baptismal candles were passed around to family members who were there to witness the anointing of this baby as a child of Almighty God.  Slowly, each was lit, as a symbol of the power of the light of Jesus Christ as it burns in each one of His children, and as a reminder to each one of them of their responsibility to help ensure that same light is ignited through love in the life of that precious baby.

This Christmas, as we ponder that magnificent birth one night 2,000 years ago in that filthy, smelly stable, we thank God for His Son, who brings a message for those of us who know too well, and reside too often in the dark, filthy, rotting places.  He goes to the darkest layers of bitter rage, and ravaging lust, and insidious pride, and He builds His kingdom of love there.  This is work that only He Himself could do to save His children, and so in His love, He did do it.

We thank you so much for your love and support these years, and we pray a very merry and sacred Christmas for each of you this year.